Rose Mary Magers was born in Big Springs, Texas, June 25, 1960, to Ellihue Magers and Opal Jean Scott-Magers.  There were a total of 6 children living in the Magers family – all of whom played some type of sports from baseball and softball to track.  Rose is the number four child in the group.  Opal Magers, mother of Rose, was the physical education teacher at the local Bauer Elementary school. It was Opal who would encourage all the young girls to excel in the athletic field, telling them that one day soon universities would offer scholarships providing the opportunity for girls to participate on a team while continuing their education.  Rose took her mother’s words to heart and became a high school standout in basketball, track & field and volleyball.

For the Magers family of six, it would have been almost impossible to send them to a university to continue their education. Because of her excellence in several sports at the high school level, several colleges and universities would recruit Rose. The time did come for her in 1978 when she accepted a volleyball scholarship at the University of Houston, trained and competed under the leadership of Ruth N. Nelson.

Three year starter at Houston and 1 year at LSU 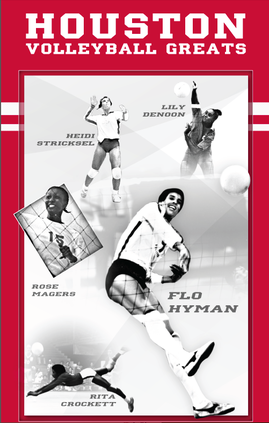 Rose was a three-year starter at the University of Houston. Because of her skills, athletic ability and development, she was setter, leading hitter and blocker for the cougars. In 1979 as a sophomore at the university, she lead the team to 1st place in the Texas Association of Intercollegiate Athletics for Women (AIAW) Tournament and 1st place in the Southwest AIAW Regional Tournament. Rose would also lead her USVBA Houston Stars team to the Lone Star Regional Championship in each of 1978, 1979 and 1980.

Rose had never been to an Opening Ceremonies. The torch, the pageantry, the fire, the emotion…she decided that this was where she needed to be. Following the Sports Festival, Rose was selected to the USA Junior National Volleyball Team to train and compete for the Pacific Rim Tournament. Her skills continued to develop as did her high-level play, and she was named Best Spiker at the Pacific Rim Tournament.

With only two years of collegiate play and international playing experience, Rose began her junior year ready to help her team to achieve the next level. Rose proceeded to lead the University of Houston’s team to 1st place in the Texas AIAW Tournament, 1st place in the Southwest AIAW Region Four Regional Tournament and 12th place in the National AIAW Tournament in 1980. In the process Rose was named to the Southwest AIAW Region Four All Regional Team and All American playing for the Houston Stars at the USVBA National Tournament.
Rose finished her collegiate career at Louisiana State University while continuing her training and development under the tutelage of Ruth N. Nelson. Rose was named to the Southeast Conference’s All Conference Team and SEC All Tournament Team plus All American at the USVBA National Tournament. Ruth N. Nelson, Rose’s coach said, “Rose was the #1 volleyball and basketball recruit in Texas and is one of the finest and most talented athletes that has ever come from the Lone Star State.  When Rose arrived at Houston, she had not played any junior club volleyball, and she was a tall, lanky, young aspiring athlete not realizing the Olympic potential that she possessed.

It was her timid personality and her family background that I was most impressed with prior to recruiting her. Her willingness not only to accept our structured college program, but also to support the disciplined training that was needed to get her as well as her teammates to the next level. Rose excelled in every position that I trained beyond the level of any of the exceptional athletes that I have ever coached. She was so talented that training her as a setter/hitter was unheard of at that time. She was an exceptional setter and outstanding hitter for four years of collegiate competition.

Rose was also by far one of the most exciting players I had the pleasure and honor to coach in my collegiate coaching career. In addition, Rose has become not only an outstanding coach, but also one of the best trainers in the game. She has transferred her love of the game to many aspiring young ladies during her summer camp programs and her junior club program. I am humbled to have been part of her volleyball career.” 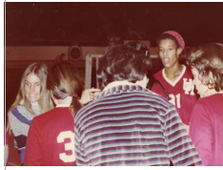 Following her collegiate experience, Rose joined the United States National Team in 1982. She was one of the youngest and inexperienced players on the team, and it was Flo Hyman who mentored her. Flo helped Rose gain confidence in her self and in her skills; she taught her the ropes and instilled the importance of representing her team and her self. It was Flo’s words that rang true in everything Rose attempted: “As long as you prepare well, you will be prepared to compete at any level.”

And what was it like for Rose to play with Flo Hyman as well as several of the best players in the world? Rose was at the end of a hitting line with Flo Hyman, Paula Weishoff and Rita Crocket when she asked herself: “What am I going to do?” It was right then and there that she committed to step it up, to prepare as hard as she could, and bang the ball off the floor as hard as those in front of her had done. And so she did! Rose was committed to learn something from every single touch.

Most Improved at 84 Olympics 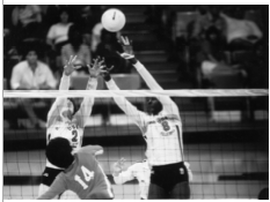 After only two years on the National Team but with tremendous international experience and outstanding support, dedication and drive, Rose became the starting middle blocker at the 1984 Olympic Games in Los Angeles and was considered the most improved player at the Games. The USA was also considered in the top two teams in world and finished second at the 1984 Olympic Games behind Gold Medallist China.

Immediately following the 1984 Olympics, Rose signed her first contract to play abroad with Nippon Electric Company (NEC), a national technology company.  NEC ranked 7th in a league of eight when Rose and former teammate Sue Woodstra arrived to the team.  By the end of the season, NEC was ranked in the top three in a tough Japan League. Over the next seven years, NEC won the Championships and continued to maintain their position in the top three. During that time, Rose was named Most Valuable Player, Most Point Maker, Best Blocker, Best Spiker, and High Point Percentage.

In 1990, Rose spent the next three years as a player and an assistant coach with the Daiei Professional Volleyball Team, which was coached by Dr. Arie Selinger. Under his direction, Rose further honed her playing and her coaching skills. In Dr. Selinger’s words, “I had the privilege to work with Rose while she was a member of the 1984 USA Olympic Team and later, in 1991, when she joined the Daiei club team in Japan.  Rose was one of those rare athletes whom God blessed with the physical and mental attributes a winner should possess. She was quick; she was skillful, and she was composed and positive under pressure. Rose learned and improved fast and she made everything look so easy and natural. It was a special sight to see Rose play. She looked graceful, poetic and yet fearsome and powerful. Rose’s tremendous competitive spirit coupled by an uncompromising striving to win made her one of the greatest and most domineering volleyball players I have ever coached or seen in action. I was lucky to have Rose on my teams.” 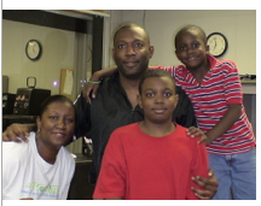 Rose not only was successful on the court in Japan, she was also successful in meeting her husband now of 32 years. At the time, Harry J. Powell, native of Huntsville, AL, was in a branch of the Navy and stationed in Japan.  They were married in 1986, then relocated to Huntsville, AL, where they have raised two young men, William Scott Powell (24) and Brandon Michael Powell (19).

Her volleyball career was not yet over. Rose spent 7 months out of the year not only competing in Japan, but also continuing to help the volleyball community in Huntsville, Alabama grow.  In 1987, she started her first volleyball camp called “Rose Magers-Powell Just Say No” with 100 players. This was during a time when drugs were running rampant in the youth community.  Rose helped train many high school teams and coaches each year before deciding to lead her own high school team. She accepted the head volleyball coaching position at Lee High School. 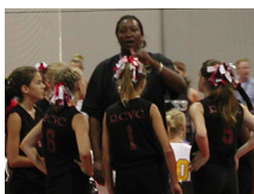 Under her leadership, the volleyball team quickly moved up in the top ten ranking in the state.  Rose spent 4 years at Lee High School before accepting the head women’s volleyball coaching position at Martin Methodist College in 1996.